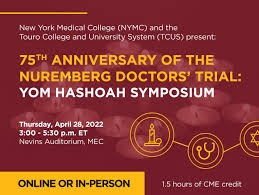 The Doctors’ Trail was the first of 12 trials for war crimes of high-ranking German officials and industrialists that United States authorities held in their occupation zone in Nuremberg, German at the end of the war.  These trails were in the U.S. military courts, not before the International military Tribunal for their willingness to participate in war crimes.

This program will be held on line and in person at New York Medical College Nevins Auditorium, Sunshine Cottage, Valhalla, NY 10595.