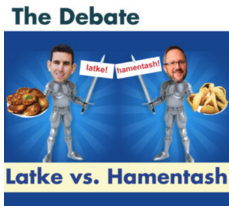 Join us for TIC’s Dr. Michael Kay and Rabbi Harry Pell as they use their doctoral and rabbinic degrees respectively to debate the merits of the latke – a fried potato pancake verses the hamantash – a triangular cookie with a filling. Each participant will have the opportunity to vote at the end! The Latke–Hamantash Debate is a deliberately humorous academic debate about the relative merits and meanings of these two items of Jewish cuisine. The debate originated at the University of Chicago in 1946 and has since been held annually. Subsequent debates have taken place at several other universities. Moderated by Rabbi Robbie Harris. Details here.